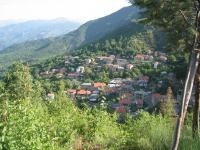 I extended my last weekend till Tuesday since there was a festival at my village. Every village in Greece has a special celebration day. My village celebrates on S. Friday, which is on 26 of the July. It was fun and relaxing. It is always good to see old friends and enjoy nature at its best. Also some discussions and disputes at the local drink shop, caused me some thinking so here is a story…

The beach was moist with mist hanging down from the sky, touching it. Even the sound from the breaking waves were lost into it. Muting the atmosphere. Making it even heavier. It was obvious that strong winds had forced the sea to whip the land. Its wrath forcing undeniable marks on the sand. Seaweeds were all over the place, entangled in various forms. The sea also washed out hundreds of sea stars. Sea stars were covering the beach; it made you think that there were all of them. None was saved. The sea was merciless on them. He kept walking parallel to the breaking waves, looking at all that mess, sure there was nothing else around. Then he saw her appearing in the fog.

She was standing in a deepening of the sand, full of sea stars. She was young with soft and small characteristics. Her hair was passing gently behind the ears, waving front and back as she was kneeling to pick up sea stars, throwing them back in to the sea. He moved towards her speeding up a little without noticing it. She didn’t seem to be bothered by the strange man. Actually, she didn’t even let an eye on him, even though she was aware of him. She just kept throwing sea stars into the sea.

He got no reply. He thought that maybe she didn’t hear him, but concluded that she probably had hearing problems. He stepped closer.

“The beach is full of sea stars, you will have to spend your life doing this to actually make a difference” he said. “A difference that no one will be able to tell”.

Her eyes were fixed on the horizon. It was like her stare was keeping it in place. It looked as the words the man spoke were not interpreted by her mind and were falling heavy on the sand, hurting the sea stars.

“Stop it!” his voice was stronger now. “You will never make it. Even if you could make a difference the sea will washout so many more of them. Do something useful with you time”

“How pathetic! Go ahead waste your life, until you understand that you can’t make a difference this way” he said as he turned away and started waking.

She grabbed his elbow and gave him a piercing stare. He was taken by surprise. She released his hand and kneeled down to pick a sea star.

“I will make a difference for this one” she said.

Symfony, Ruby on Rails and Django : The unsual review (Part 2)

Symfony, Ruby on Rails and Django : The unsual review (Part 1)