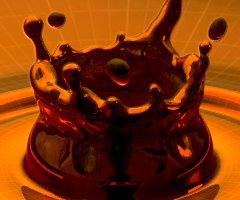 I’ve been watching closely Blender since it became open source. It was when I was looking for a modeler to be used with Sylphis3D. I must say it is a modeler that catches the eye. You see very impressive renderings, stunning videos and when you try to download the program you realize that we are talking about a 4.5MB download! You really start to realize there is something different about this modeler. And that can’t be more truth. We are talking about a modeler that :

And this is just a crude list of features. The interesting thing about this modeler is that tries to do things in non conventional ways. The interface is one of the things you notice first. It is quite different from what people are used to, but when you get used to it, its something else. Actually this is the only modeler I ever managed to create something more than two spheres and a box.

If you know about Sylphis3D, you will be probably asking yourself why didn’t I choose it for modeling for Sylphis3D. Well it is true that I went for 3DSMAX for Sylphis3D. The problem? Blender didn’t support undo at the time. Yeap.. no undo! It is hard for me to think of modeling without undo and I was sad that this was keeping me from using Blender. The good news is that now Blender supports undo. My wish came true, so the last days I was all around Blender.

I actually got the motivation to white this blog entry when I created an import plugin for .SMF files. SMF files are very simple mesh files that I use for Sylphis Generalized Triangle Optimizer, and are of this form :

The above file describes a single triangle. Writting an importer for such a file should be easy. I managed to write an importer in 15 minutes! The code was written and debugged inside blender without ever restarting it and it is 40 lines or so. Compare that to the effort I made for the same imported for 3DSMAX. For 3DSMAX I had to use Visual Studio. Create a project for DLL. Have a very long test cycle. Every bug in the importer usually crashed MAX, which wasn’t that bad since you had to restart 3DSMAX to reload your new DLL anyway. The code in C++ is about 100 times bigger and several files with most of the code being “dressing”.

Final word : Blender is going be actively used in Sylphis3D from now on.

Porting your game from iOS to Android